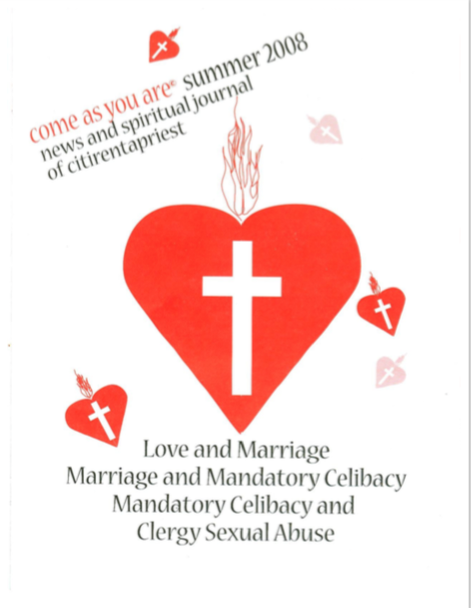 Come As You Are – Summer 2008 Newsletter

In the year 2000, I had a dream that I later related to a corporate organizational consultant doing some work for CITI at the time. (Joe is also a married priest.) He said, ―That wasn‘t a dream that was a vision, a prophecy!‖ It went like this:
“I was in a Catacomb cell. There were no doors, just archways, and the guards throughout wore uniforms like we see worn by Vatican guards in Rome. There were no floors, just dirt and it was dark, cold and damp, but I could see a fledging light down the winding hallway.
All of a sudden, a small GoKart appeared —no driver and the engine was running,, almost like it was inviting me to climb in. I did, but it would only move a few feet at a time, and very slowly. As I looked around to make sure I wasn’t being followed, I noticed a small, very bright burning cross bouncing behind the GoKart, trying to hop on—hot like a horse’s wrought iron shoe being fired. I felt sorry for the cross so I picked it up and put it in the GoKart. We instantly flew out of the Catacomb almost like a spaceship.”
I woke up startled and the dream haunted me for hours, even days. Prayerful reflection made me realize that the ―red hot cross‖ was clergy sexual abuse that almost no one wanted to deal with in 1999 or prior years (my own research began in 1992, after Tom Doyle‘s paper had already been released to the hierarchy [1985] and Richard Sipe‘s ―Secret World‖ was published [1990].