“Holy Spirit, Are You Kidding?”

Crossing the threshold into the inner-workings of the church albeit the church community or church reform is like stepping into another culture, probably best compared to becoming an educator, or going into politics, or moving to a third world country for a few years. New socialization is required. It is somewhat of a shock initially because you’ve been Catholic all your life and you thought you knew what was going on. So many questions. For instance, who outside the church’s inner circle knew that mandatory celibacy was not God’s law? Who knew the law was churchmen’s law, churchmen’s political law? Who even knew that 100,000 priests had left? Who knew that priests fooled around? We were accustomed to the transient lifestyles of most pastors and curates in our parishes. Most transitioned after six or seven years. Who knew where they went? Catholics thought it was to another parish. The majority of us didn’t realize many were leaving to get married. These new findings were very different and I was such a neophyte. Many married priests were innocent too.

Who knew that the political hierarchy wrote two sets of Canon Laws, first to forbid priests to marry and forbid priests who married from exercising their ministry. The second set of laws –21 of them–reminded priests of their duty to minister if they were asked by the people. In fact, one law specifically says the request cannot be refused (Canon 843). Did the hierarchy have fears of divine repercussion because of the mandatory celibacy law they wrote in 1139? They knew it did not come from God. The second set of laws–those that forced priests to minister when asked–were written but never made public, so no one really knew unless they read The Cole of Canon Law.

Most importantly, priests were bound by promise to obey the bishop at all costs–even after they left their clerical position. Lee Ganim was told to move 500 miles away from his station when he took a leave of absence, and he did. Anthony Padovano was told he would be welcome again after his wife died. Ralph Pinto was told to have an affair (“Get it out of your system.”) instead of marrying Linda. Fortunately, he did not obey. All were told never to tell anyone they were a priest, and to put their chalice in the closet forever.

I was defiant all of my life. I guess I would have never made it in a convent. Strange that I should have been the one who would take those 21 Canon Laws to encourage married priests to defy the promises they made to their Bishop, obey Canon Law and take care of the people. Strange that the Canon Law research had been sitting around married priest circles for twenty years and no one was doing anything about it.

I remember attending a workshop on Canon Law, conducted by a Canon Lawyer, at my first married priest conference in June, 1992. One priest wanted to know if he would be permitted to celebrate the Eucharist (Mass) in his living room with his family. His chalice had been put away for years and the only thing he was told he could do was to provide the Last Rites to a dying person.

The CITI workshop the morning of the conference had maybe seven or eight married priests in the audience. As we were sharing stories, one priest told of a Chicago area church that had no resident pastor, yet 19 married priests would be sitting in the pews when the visiting priest came for Sunday Mass. (They called the visiting priest a circuit rider who celebrated Mass in three or four churches each week.) So I said, “Why not puncture the visiting priest’s tires at his previous parish earlier in the day so a married priest could say Mass instead?” They thought it was funny, but the concept rang a bell because the morning workshop attended by 8 was followed by a larger room and people sitting on the floor at the afternoon session–75 or 80 people.

It was also at that conference that I saw, however never met, Del Smolinski, the Canon Lawyer who changed my life in CITI. Del had spent twenty years researching The Code of Canon Law which he was able to use for his own position as a married Catholic hospital chaplain back in the 1980s and 1990s. It was what we needed to put these priests back in public ministry, at the time I thought for the purpose of replacing circuit rider priests with resident pastors in the many churches that had already been closed because of the priest exodus. 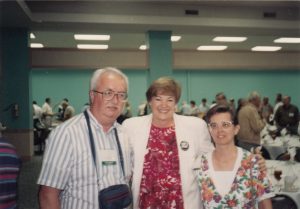 So, what to do about all this information? Canon Law that allowed married priests to minister publicly and 25,000 U.S. priests married and awaiting the (second) call. It was my summer dilemma. My summer prayer. My summer questions to God: “So, you’ve called me to Your service; you’ve given me this enlightenment and knowledge, but, you haven’t told me what to do. I need a little help here.”

The married priest conference took place in the latter part of June,following months of research on my new curiosities regarding mandatory celibacy. Stories were also abounding about clergy sexual abuse, stories one would see only if one were looking. I was seeking reactions from other mainstream Catholics–“Who else knew what I had discovered?”

I became inspired to actually write ad copy for the first time in my life (my work in the Boston advertising agency had been on the business end, not creative). These ads addressed the issues of priest shortages, closed churches and the political climate surrounding the hierarchy regarding mandatory celibacy. Dick and I had received a healthy bonus for sales achievements the previous year. I used my share to incorporate CITI and to run ads in National Catholic Reporter to arouse interest among the religious community, and in regional issues of TV Guide Magazine to create awareness among the public sector. The response was phenomenal. 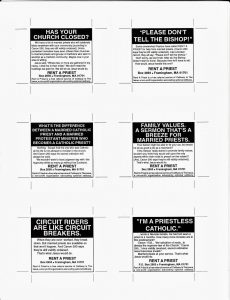 These above ads were part of a series of ads directed to the Bishops that ran in National Catholic Reporter in 1992. They were among other ads winning the prestigious Boston Hatch Awards that year. 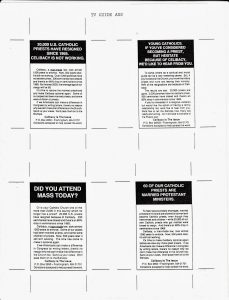 The above ads ran in regional editions of TV Guide Magazine and also won prestigious awards in Boston Hatch Awards. My greatest joy was when they were hung next to ads written for the Archdiocese of Boston in 1993.

Letters and $$ arrived from priests and married priests, along with stories from the general public who had suffered emotional abuse at parish level (e.g., one grandmother wrote that her two grandchildren would not be baptized because her son “no longer attended Sunday Mass and was not putting donations in the basket.”) At that time, no one really knew that almost 75% of the Catholic population no longer attended weekly services (1992). TV Guide later wrote that they hadn’t had this kind of reaction to any ads in their magazine in over 15 years. Our ads ran in only 7 out of 106 Tv Guide markets.

I was perplexed. So many churches had closed, so many had no resident priest, so many Catholics without the Sacraments especially those in dire need like my Mother. Why then, were the news releases I was sending the media regarding optional celibacy not being published? Why were they completely ignored? I certainly knew what I was doing given 17 years experience in advertising and television and another almost 13 or so years in sales and marketing.

Several articles had been written about clergy sexual abuse and mandatory celibacy by a reporter for the New Orleans Times Picayune in the late 1980s and early 1990s. When I contacted him to inquire about the CITI news releases, he said that the subject unfortunately was being treated with a “ho hum” attitude by the news media because, “mandatory celibacy has been around for 860 years and isn’t about to change soon.” He wished me well and added, “I hope you don’t lose your faith over this.”

At the end of these puzzling weeks, I threw the problem back to the Holy Spirit, “If you want me to do something, you’re going to have to come up with a better plan.” That was my prayer throughout July and August, 1992.

In mid-September, I was in Maine at our cottage with my sister who was visiting for a few days. During one of the weekend nights, I had a dream, a vision. I saw two hands holding the Communion Host the way we see during Eucharist at Mass. However, there was a brilliant gold ring on the third finger of the left hand. I even saw the brochure with this illustration in my dream. Above it, three words: 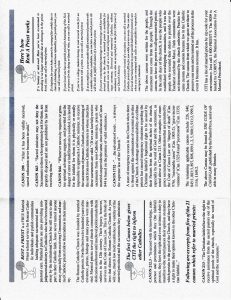 The next day, I phoned Del Smolinski and told him of my vision. I then set up a conference call among Del, another married priest and myself and together, we developed the contents of the brochure to include pertinent information regarding Canon Laws that validated married priests and their public ministry…along with suggestions as to how one might call a priest for spiritual needs.

The slogan Rent A Priest became so popular that it brought to our front door, television cameras from as far away as Belgium and Austria, later NY Times and the front page of the International Herald Tribune. Reporters made fun of it, some thought it was irreverent, we even made news in National Catholic Reporter in February 1994. 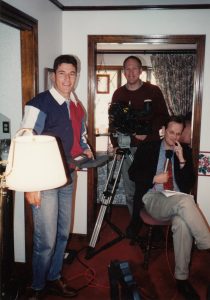 Belgian Catholic Television Crew in Framingham, Mass. USA to do a story on Rent A Priest, (youtube.com/also vimeo.com) prompting a Rent A Priest organization of married priests in their country.

Most excitingly, 60 Minutes saw our little homemade booth with a felt cloth sign in the fall of 1994 at a national Catholic church reform conference. The Mike Wallace interview in 1995 (youtube.com) was my personal favorite because CITI’s married priest Vice President John Shuster and I had not been invited to participate in the round of interviews taking place at that weekend’s conference, yet we were the ones who made the cut. The slogan was controversial and we were an embarrassment to many of the more conservative church folks. But, the public “got it.” 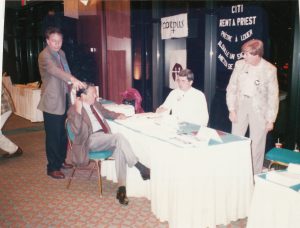 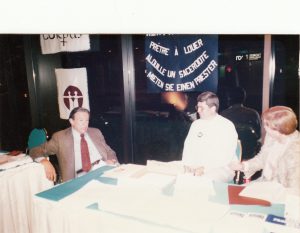 While our intention was to attract priestless parishes, the surprising response to Rent A Priest was among the unchurched, lapsed Catholics as well as the many divorced who wanted to remarry without an annulment, and for various interfaith rituals–those among the hundreds of thousands who had been turned away from their local parish. Our motto became: “If the church says no, call us.”

By the end of 1992, we were beginning to get requests for priests, but hardly had any priests to respond. Even though they were obligated to the people, defiance of their promises to their bishop was a difficult thing to overcome and they had not yet been convinced enough.