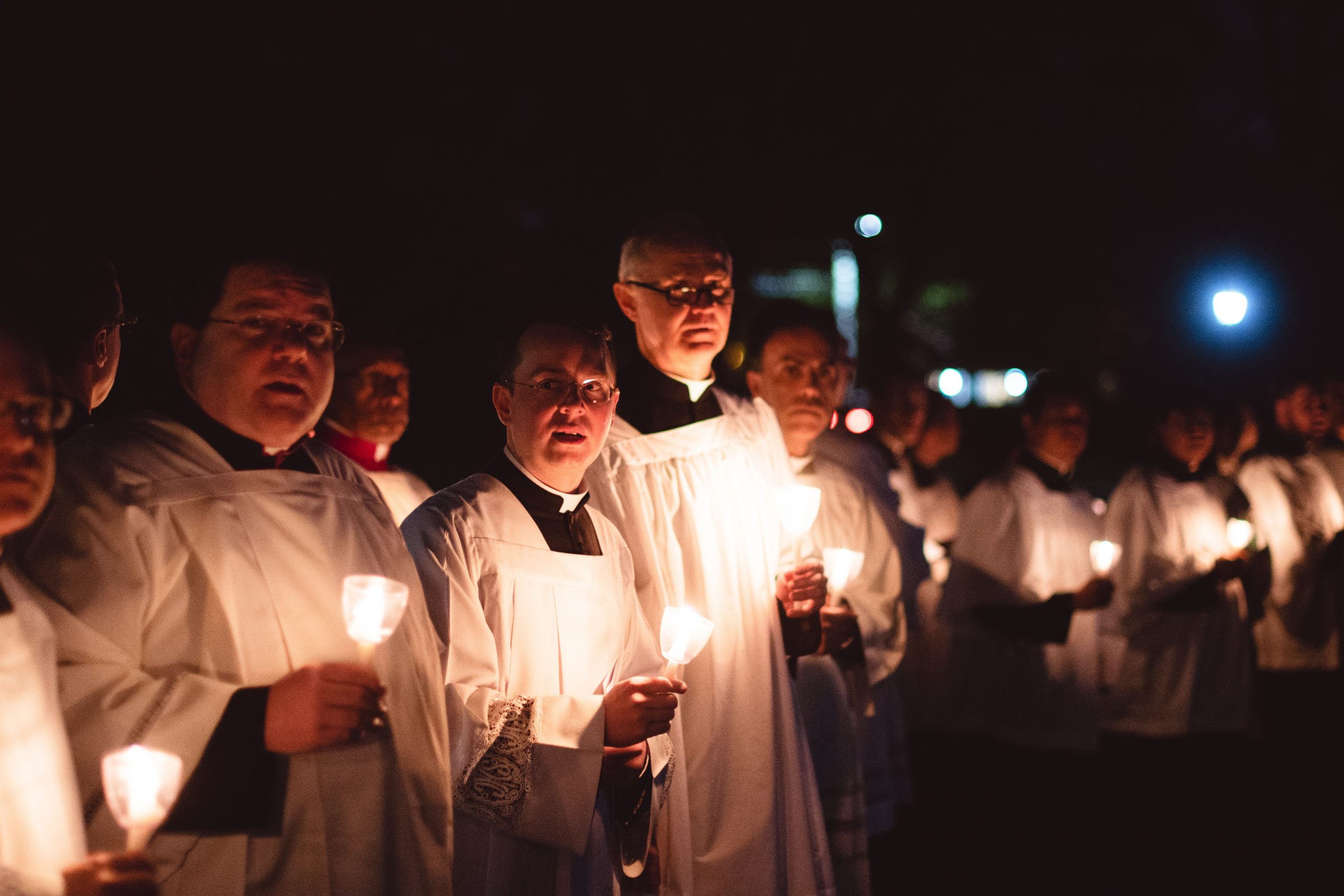 SEXUAL POLITICS IN THE PRIESTHOOD
by John Shuster

(I wrote this essay to the Roman Catholic reform group Voice of the Faithful in 2007 in response to their desire to “Keep the faith. Change the church.” in the wake of the ongoing clergy sex abuse atrocity.)

I believe there is a direct relationship between sexual politics in the priesthood/hierarchy and any reform group’s ability to change the church. The key to Voice of the Faithful’s survival and success lies in backing the right issues, understanding the needs and culture of the priesthood/hierarchy that owns and controls the church, and being relentless in the art of polite public confrontation that exposes sexual and financial improprieties and compels other Catholics to join and support you for change through strategic action.

Sexual politics in the priesthood/hierarchy
The myth of sexuality in the priesthood is that it is comprised overwhelmingly of straight men who are 99.9% sexually chaste in faithfulness to their promise/vow of celibacy. Mandatory celibacy is part of the power base of the priesthood/hierarchy. Because it serves a political function, a priest’s sexuality is not private, but a public issue. Catholics have been taught to honor and support priests because they profess to have forgone a traditional family to lead sexually chaste lives in prayer and service to the people of the church. That’s the ideal. The reality is quite different.
For centuries, gay men have been beaten, burned at the stake, tortured and killed for being whom God made them. They have suffered great loss personally and collectively. Like any group of persecuted people, they have sought safe places to hide and thrive. The priesthood, with its public and mandatory promise/vow of celibacy, became a perfect haven of safety and instant respect for gay men. It serves them well because it’s socially acceptable for them not to marry a woman and they live in-close with other men – somewhat beyond suspicion. They enjoy a comfortable lifestyle replete with the adulation of parishioners who have been taught to believe in the myth of total sexual abstinence within the clerical celibate lifestyle.
Gay men’s common history of suffering and the search for belonging, especially post Stonewall (google “Stonewall Riots” for background), has created a strong camaraderie among gay men in the priesthood. A core goal of the gay rights movement is to build political alliances that provide for the safety and well-being of the gay community. The common and well grounded fear of violence and persecution from straight people not only helps strengthen this bonding among gay men in general, but has also generated new political realities in the priesthood.
With the developing politicization of the gay rights movement and the widespread portrayal in our electronic media and literature of gay men as heroic yet still victimized by straight culture, much compassion has developed for the cause of gay rights. And rightly so. However, this compassion has superseded common sense and critical thinking at times. In certain venues, anyone attempting to criticize the shortcomings of a gay man and his leadership potential in a church setting can find himself or herself the target of a piranha-like attack from gay-friendly supporters. I think it is important to maintain a healthy balance between compassion for gay people and the realities of Catholic Church clerical gay politics.
Of the many effective gay priests I know, there are also those gay priests in leadership positions who lack the personal strength and qualities to provide balanced leadership that always finds the best solutions for the church. The worst gay church leaders I have met have been terminally narcissistic and vindictive towards anyone who might call them to task. The classic “power and control” explanation for their takeover and abuse of church power is a correct analysis in a general sense, but lacks the nuanced sexual politics specificity that many Catholics sense but find difficult to identify, articulate, and challenge. The need for clerical control has been expressed at the sexual level as well, and sometimes, unfortunately, with children and young people. I have spoken with gay survivors of clergy sex abuse. Often, their first sexual experience as confused gay teens was with the priest who was counseling them. The priest decided to “comfort” the teen by taking him to bed. That is abuse, statutory rape, and a legally prosecutable breach of a superior-subordinate relationship. Those priests belong in jail.
Priests who lead secret, active sexual lives are also open to blackmail and extortion. Those who abuse children are criminal manipulators by trade. They will use any means possible to gain access to children and then work to be protected once they have abused. When a predator priest finds out that Bishop Bill and Father Fred went on a gay cruise together last fall out of Miami, the bishop is compromised. The threat of outing makes Bishop Bill a compliant secret sponsor of the abuser. Is homosexual politics in the priesthood the sole cause of the sexual abuse crisis? No. Does it play a central role in the complex reality of the sexual abuse crisis? Yes, it does.
A number of gay priests of integrity have also left the clerical ranks in recent years. They have done so in many cases because they have rejected the sexual politics they have encountered and have a desire to lead a sexually authentic life with a partner/spouse. We have a number of partnered priests who are members of our Celibacy Is the Issue (www.citiministries.org) group to which I belong. These priests need to speak out and share their spiritual journeys with you and the wider church populace.

Church Reform Groups – a history of NOT changing the institutional church
There are numerous church reform groups that have come into existence since the repression of the spirit of Vatican II that began in the 70’s. In all that time, none of these groups has effected any real change in the role of Catholics in the institution, transparency of the hierarchy, accountability of church leadership, or the less than chaste and simple lifestyles of priests and church officials.
The reform groups still in existence today are essentially support groups – people who have gathered in response to injury. They have developed cottage industries of information exchange – conferences, speakers’ bureaus, newsletters, fundraising advertisements, national conventions, etc. These are worthwhile activities, but are only internally efficacious and operate primarily for the members’ mutual benefit. They have little to do with reform.
All of these activities have helped reform-minded Catholics personally as a subset group of the Roman Catholic Church, but they have not opened the priesthood to all who are called to serve. They have not made local bishops accountable to their people for ministerial project focus, general diocesan policies, or financial decisions. Their organizations have not stopped parishes from being closed. They have not slowed the attrition of straight priests leaving the corporate priesthood or the defection of cradle Catholics to other denominations. They were not able to detect, expose, or stop decades of systemic sexual abuse of our children. Some even deny the depth of this problem and told me and other supporters of the survivor’s movement in the mid 90’s to stand down because “the bishops are taking care of this problem.”
Church reform groups have essentially served the Vatican’s objectives well. These groups provide a place for Catholics to go when they figure out what is really going on in their institutional church. The Vatican knows this and is more than willing to let reform groups exist because they play a key role in its overall control strategy. Arch/bishops will even grant audiences to, and receive studies and position papers from well-meaning reform groups. The reform group members feel that they have achieved a great accomplishment in gaining an audience with the prelate. In reality, they have simply delivered him a detailed summary report of their activities. Pleasantries and mutual good wishes are usually exchanged between the prelate and his concerned guests in these rare meetings, but in the short and long run nothing changes. At the end of the meeting the reformers have been contained and led on by their own good intentions and the false hope and gratitude extended by their local arch/bishops.
Catholics who belong to reform groups usually continue to attend their local parish churches. Each Sunday they donate money to their local church, which is legally owned by the bishop or a corporation that the bishop controls. This system of episcopal ownership supports the Vatican’s agendas. There is an element of self-deception here – the idea that “I am just going to support my local parish because we have a good thing here.” Unfortunately, that is part of the codependency that is required for being a good Vatican Catholic. You focus on your local parish, but your donated resources are immediately added to the bishop’s balance sheet and continue to support the same mindsets and special arrangements that enabled the sex abuse atrocity to take place and be covered up by a predominantly gay hierarchy for decades. Partaking in this donation and ownership arrangement makes the laity full enablers of the Vatican agenda.